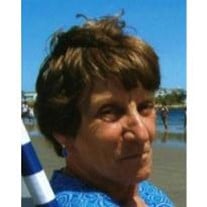 Angeline Marie Potzner, 71 of Hudson, died Monday February 6, 2012 at her residence surrounded by her loving family. She was born September 2, 1940 in Limestone, ME daughter of the late Aurelle and Leda (King) Duprey. Angeline was the wife of the late Joseph Potzner who died in 2010. She was also predeceased by 2 brothers, Dick Duprey and Vincent Duprey and a sister, Thelma Duprey. Angeline was employed with Bemis Plastics for 40 years. Her enjoyments included gardening and going to the beach. She loved spending time with her grandchildren. Survivors include a son Jeff Potzner and his wife Tammy of Dracut, MA, three daughters Roberta Sullivan and her husband John of Hudson, Debra Orleans and her husband James of Hudson, and Chris Potzner of Nashua. 7 Grandchildren; Heather Dunne, Amanda Ducharme, Thomas Dunne, Brianna Orleans, Branden Orleans, Joseph Potzner, and John Potzner. Two great grandchildren Camryn Sullivan and Kaleb Dunne. Three brothers Gilbert Duprey and his wife Terry of Dracut, MA, Norman Duprey and his wife Arlene of Limestone, ME, Roland Duprey and his wife Jackie of Limestone, ME. Three sisters Joan Malone of Hudson, Dot Potcner and her husband Steven of Holbrook, ME, Linda Lucaratti and her husband Robert of Everett, MA. As well as many dear nieces, nephews, and cousins. Visiting hours will be held on Wednesday February 8th from 5pm - 8pm in THE DUMONT-SULLIVAN FUNERAL HOME, 50 FERRY ST. IN HUDSON. A funeral mass will be celebrated on Thursday February 9th at 10am in St. Kathryn Church, 4 Dracut Rd. in Hudson. ALL MAY MEET AT CHURCH. Burial will be in St. Patrick Cemetery in Hudson.

Angeline Marie Potzner, 71 of Hudson, died Monday February 6, 2012 at her residence surrounded by her loving family. She was born September 2, 1940 in Limestone, ME daughter of the late Aurelle and Leda (King) Duprey. Angeline was the... View Obituary & Service Information

The family of Angeline Marie Potzner created this Life Tributes page to make it easy to share your memories.