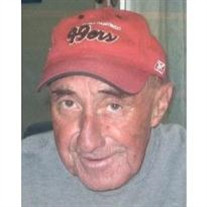 Alfred Paul Cote, 75, of Hudson, died Wednesday, April 22, 2009 at St. Joseph hospital in Nashua surrounded by his loving family. He was born October 12, 1933 in Nashua, son of the late Alberic and Cecile (Hebert) Cote. He was also predeceased by a brother; George Cote and a granddaughter; Liberty Cote. Alfred was the husband of Jeannette (Landry) Cote of Hudson with whom he shared 49 years of marriage. He was a graduate of Nashua High School and served in the U.S. Navy for 4 years. Alfred was employed with Twentieth Century for 15 years and later with Edgecomb Steel for over 20 years. He was also an avid softball player who will be remembered for his great sense of humor whose greatest source of pride came from being the father of what he called his ”Magnificent Seven.” Besides his loving wife Jeannette, survivors include his magnificent seven children; Kathryn M. Cote-Wayman and her husband Gary of Nashua, Steven J. Cote and his wife Elizabeth of New Boston, Laura M. Clancy and her husband Timothy of Milford, Lisa F. DeCoito and her husband Shannon of MS, Kenneth M. Cote and his wife Dawn of Merrimack, James A. Cote and his wife Kelly of Hudson, Jason S. Cote and his wife Taina of Florida. 11 Grandchildren; Allen Cote, Dylan DeCoito, Kiersten DeCoito, Joshua DeCoito, Kortney DeCoito, Jason Cote, Marcus Cote, Mateo Cote, Abbigail Cote, Lucy Cote, and Sadie Cote. Three sisters; Francis Dowling of Florida, Theresa Seltzer of Hudson, Rachel Dumas of Nashua. As well as several nieces, nephews, cousins, and many in-laws. Visiting Hours will be on Fri. April 24th from 5-8pm in the DUMONT-SULLIVAN FUNERAL HOME, 50 FERRY ST., IN HUDSON. A Funeral Mass will be celebrated on Sat. April 25th at 9am in Blessed John the XXIII Parish in St. John the Evangelist Church, 27 Library St., Hudson. All May Meet At Church. Burial in St. Patrick Cemetery, Hudson. In lieu of flowers the family encourages donations to the American Cancer Society, 2 Commerce Dr., Suite 110, Bedford, NH 03110.

Alfred Paul Cote, 75, of Hudson, died Wednesday, April 22, 2009 at St. Joseph hospital in Nashua surrounded by his loving family. He was born October 12, 1933 in Nashua, son of the late Alberic and Cecile (Hebert) Cote. He was also predeceased... View Obituary & Service Information

The family of Alfred P. Cote created this Life Tributes page to make it easy to share your memories.