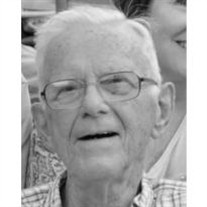 Albert Peter Aucella, 89, of Tewksbury, MA, (after many years in Litchfield NH and Malden, MA) passed away from complications from congestive heart failure early Saturday morning, October 9, 2010 at Tufts Medical Center in Boston, MA. Albert was born on September 24, 1921 in Malden MA, raised in the house that he would live in for the next 80 years. He was the son of Carmine and Josephine (Solomita) Aucella and the loving husband for nearly 58 years of Yvonne R. (Zullo) Aucella, who predeceased him. Albert worked hard and without complaint as a patient care-giver to Yvonne during her final years. Albert graduated from the Massachusetts College of Pharmacy in 1943. He was inducted into the United States Army in June, 1945, where he served as a Medical Aidman and received a World War II Victory Medal. He served a tour in Italy, and enjoyed reminiscing about San Marco in a Venice empty of tourists, and was most rapturous about a small northern hill town, Cortina D’Ampezzo. Albert was honorably discharged as a technician of the 313th Medical Battalion in November, 1946. He began his career as a pharmacist in Somerville, MA, where he met his future bride, Yvonne Zullo. They married in 1951 and lived in his family home in Malden, where they raised their three boys. In the early 1950s, he opened up his own drugstore, Aucella Drug Co., which was one of four drugstores in Maplewood Square at the time. Gradually, the other stores closed and his became the only drugstore in the neighborhood—and it still exists today. Albert enjoyed studying Italian and talking to his Italian-speaking customers. He had the one store that was sure to be playing opera on the radio every Saturday afternoon. He retired in 1986. Albert also played the violin and appeared for years in the Melrose Community Orchestra. He was a strong believer in learning to play an instrument and made sure his sons took piano lessons. At age 80, he and his wife moved to Litchfield, NH—his first move ever—where they loved their new home and neighbors. He moved to Tewksbury in June. Albert is survived by his three sons; Peter Aucella and his wife Rosemary of Lowell, MA, Richard Aucella and his wife Linda of Londonderry, NH, and Albert Aucella and his wife Jessyca Broekman of Falmouth ME. Also survived by grandchildren: Adriana, Keith, and Judea; nieces and nephews: Leslie, Lindsay, Gary, Robert, John, Linda, and Ronnie; and many friends. He was predeceased by his brother, Carmine Aucella. Visiting Hours will be held on Tues. Oct. 12th from 6-8pm in the DUMONT-SULLIVAN FUNERAL HOME, 50 FERRY ST., HUDSON. A Funeral Mass will be celebrated at 10am on Wed. Oct. 13th at St. Francis of Assisi Church, 9 St. Francis Way, Litchfield, NH. Burial will take place immediately following mass at Holy Cross Cemetery, Hudson, NH.

The family of Albert Peter Aucella created this Life Tributes page to make it easy to share your memories.

Albert Peter Aucella, 89, of Tewksbury, MA, (after many years...